Born into a car-obsessed family, Juliette Loughran worked for her father’s business selling high-end cars, before setting up her own art gallery that ‘roams’ some of London’s most culturally vibrant areas. We spent a morning with her to talk cars, art, and that time her Barbie drove a Bizzarrini…

Daughter of well-respected luxury and classic car dealer William Loughran, it was almost inevitable that Juliette Loughran would become a ‘car girl’. Her earliest automotive memory involved peering beyond the humped bonnet of a 4-cam 275 GTB, and squealing with excitement as her father wound up its long-legged V12. But for Juliette, while the automotive magic that captures the imagination of so many of us has never dulled, it was a fascination with modern art that saw her create her own success. After learning the ropes of business working for her father’s company, she set up a ‘pet project’ art gallery in London that has since drawn widespread accolades in the art press (particularly for its ‘roaming’ format) and is now blossoming, exclusively representing some of the most talked-about names in the modern art world. We joined Juliette on her morning commute to the latest gallery space, situated in the heart of Chelsea – but not before she took us on a few laps of Kensington’s mews streets in her beloved Morris Minor convertible. 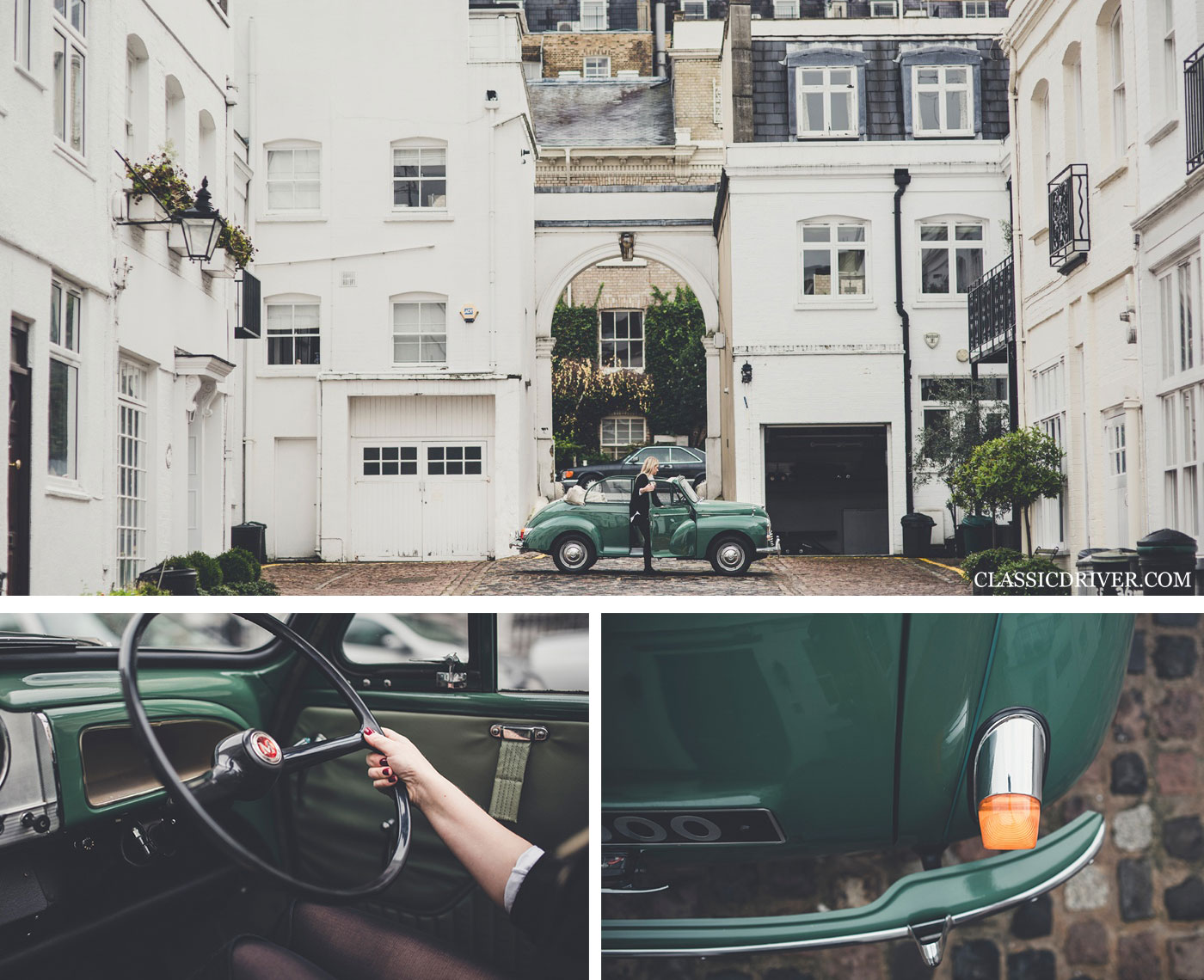 What’s the story behind your Morris Minor?

My father bought the Morris Minor when I was around four, with the intention of passing it down to me when I was old enough. It has super-low mileage for its age and is completely original – someone had arrived at the showroom looking to buy a Ferrari, but my father was just as interested in buying the guy’s Morris Minor, so they worked out some sort of deal. Since he gave it to me, people have tried to buy it from me but I’ll never sell it – it’s been around as long as I can remember, and it has so much sentimental value. Even though there were always more exotic cars around, Dad would always take me out in it, so I have many happy memories of it, both as a child and an adult.

The Twisted Defender is pretty cool, too…

I’ve always loved Defenders, but was put off when I drove one for the first time – I’m not the strongest person, so everything was a bit too heavy for me. Then I found out about the Twisted Defenders, and how they make them a bit more comfortable and luxurious, but retain their utilitarian character. Also, the company is based in Yorkshire near where I went to school, so there was a nice little affiliation.

You’re clearly a car girl – what made you turn to art?

It was a complete accident. I’ve always been mad about cars – when I was a kid, I used to borrow my dad’s model cars for my Barbie scenarios. Anyway, when I got a bit older I was working with my dad in the showroom and I’d save my wages to buy one piece of art at a time. I bought one original Dave White, and it cleared me out. As I slowly collected more, I’d hang them on the wall of my office, then clients who came to look at cars began to take an interest. Some of them wanted to buy the pieces I had but I didn’t want to sell them; however, it gave me the idea of representing a motorsport artist I knew. It began as a little side project and gained momentum, then one day I spontaneously decided to hold a show in London. I rented a garage in Notting Hill for a week – I’m talking a tiny one-car garage with a concrete floor – and it went really well. I was hoping to sell one piece, but everything sold within that week. From there, I started doing more pop-up shows around London and it snowballed into the kind of ‘roaming gallery’ we have now. I really didn’t mean to be taken away from the cars! 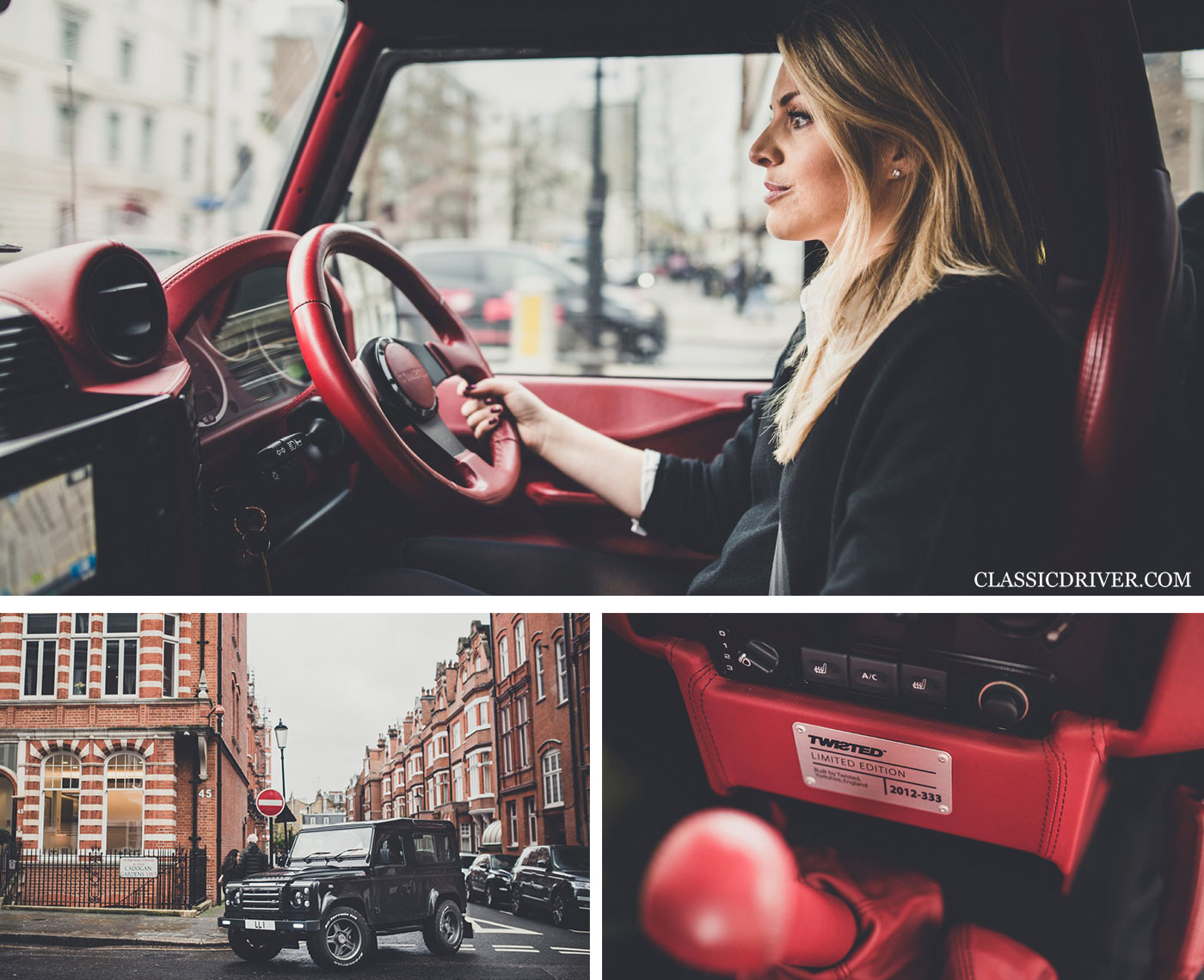 London is a hub of activity for both the car and art industries – why do you think this is?

When you mooch around a city like London that has so much culture and history, you’re continually inspired – whether you’re into cars, art, or something else, you’ll always find something that excites you here, and that breeds ideas for more exciting things to happen. It’s where everyone wants to be, either to live or even just to spend a few days en route to somewhere else in the world.

Which aspects of the family business have you incorporated into your own?

My father has the most incredible work ethic, and I hope I have taken on at least a little bit of that. For him, it’s really important for the customer to have an enjoyable experience, and that’s something I’ve tried to bring into the experience of buying art, which can often be cold and elitist. Even if someone’s buying a print for £400, I’ll give him or her the same service I would to someone buying a Rolls-Royce Phantom. More often than not, people are buying the person just as much as they’re buying the product. 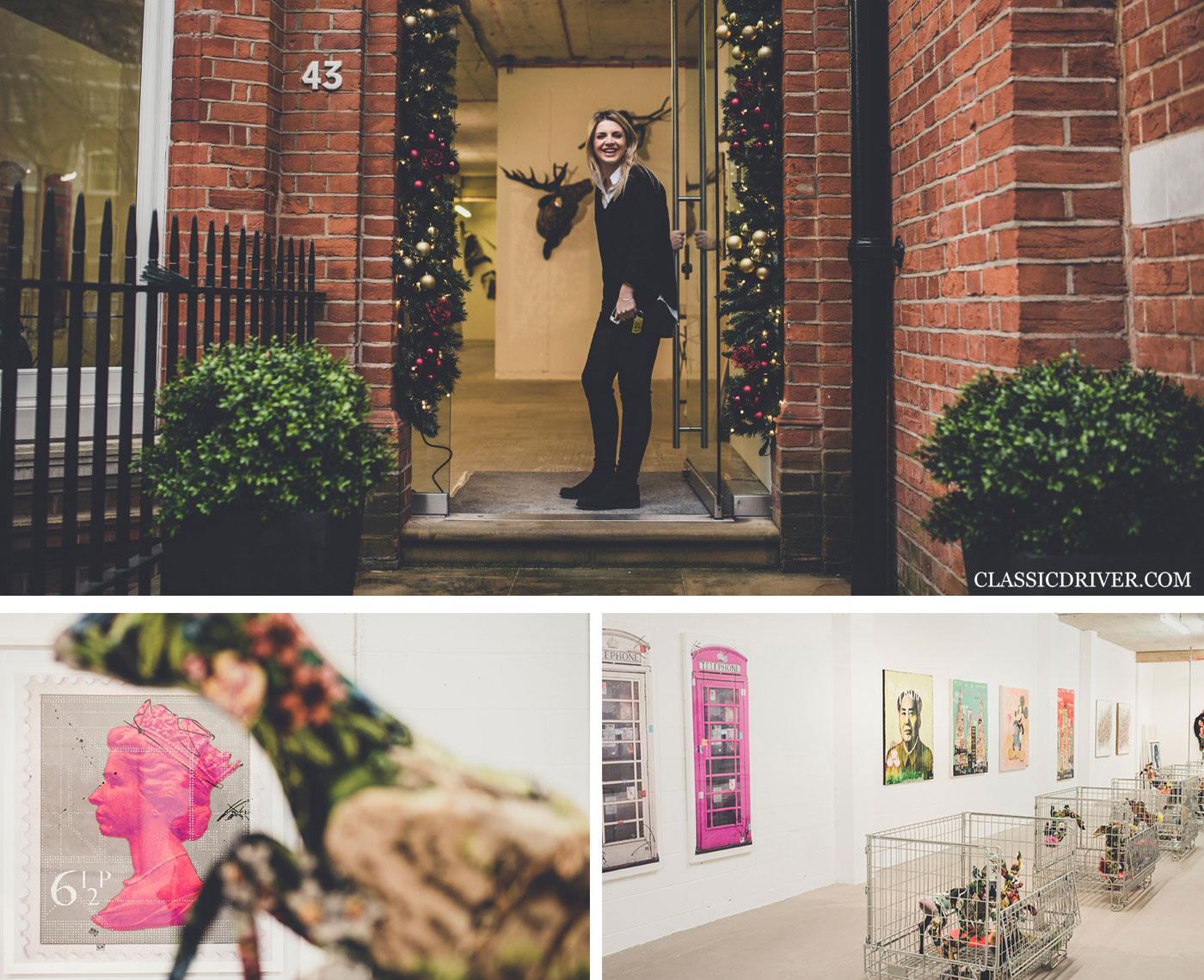 Can you explain the synergies between the car and art world as an insider in both?

Obviously, both are essentially luxury products that you don’t genuinely 'need'. But if that were the end of the story, both markets would have been hit hard during the recession; yet the opposite happened. I think the reason for that is the emotional bond. You could put all your money into shares, but you’d have no attachment to them. However, every painting in my house has a story that’s personal to me – I remember where I bought it, what was going on in my life at the time, and it’s nice to have those memories. It’s the same with cars: you’ll often find people aspired to own a particular car when they were younger, so when they’re finally in a position to own one, that has a deep personal meaning to them that it won’t necessarily have to someone else.

Since starting up in 2012, you’ve operated what you’ve called ’roaming’ exhibitions rather than operating from a permanent location – why is this?

As I mentioned, when I started I never thought it would become a permanent thing. I didn’t want a permanent base, as I wasn’t sure it was what I wanted to do long-term. Now I look back, I’m so glad it happened like that because it’s been so interesting to go around London and experience all the little sub-cultures – for example, what works in Shoreditch probably won’t work somewhere else. There’s even a massive difference between the clients in Chelsea and Belgravia, even though it’s only the other side of Sloane Street. What I also love about the idea of the roaming gallery is the freedom it gives you to find a space that suits a particular type of exhibition or artist: for example, large paintings can be more suited to an open, industrial-style space, whereas the smaller, more intricate pieces might work better in a more intimate setting. In the future, I’ll definitely have a permanent space, but it would need to be a pretty amazing one for us to give up the roaming aspect. 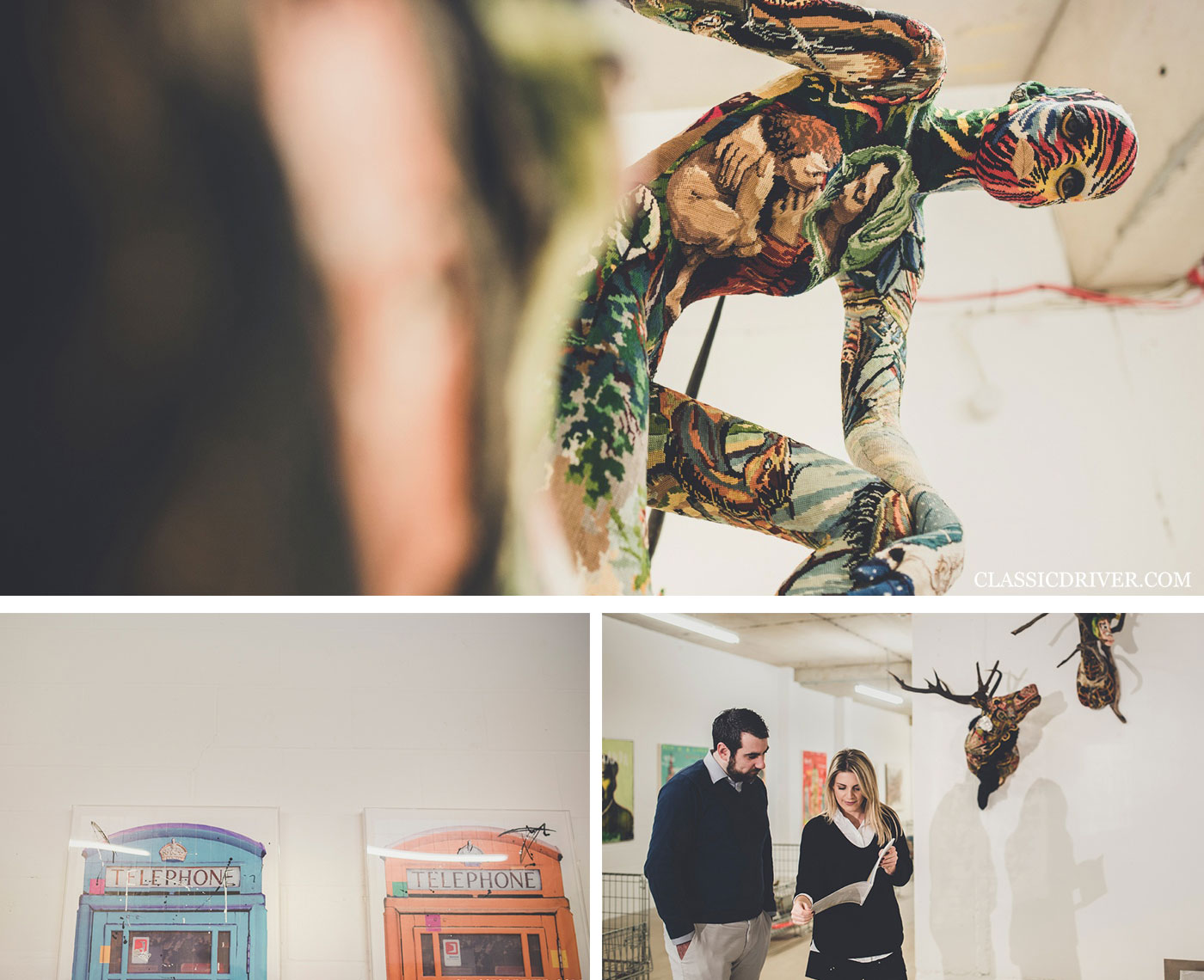 Do you think this approach could be used to sell classic cars, and have you ever considered doing so?

I’ve definitely thought about it, and we experimented in bringing the cars and art together when I commissioned Dave White to paint the Jaguar E-type a few years ago. With that, we brought the art into the cars, so I guess the next step would be bringing the cars into the art scene. It would have to be the right location for both, though – I wouldn’t just want a random car in a room with an unrelated load of art. There would need to be a link between them that made sense, and I’d need to personally like both, as I wouldn’t be able to sell something I’m not personally passionate about. But you should definitely watch this space… no pun intended.

How do you decide which artists to represent in your gallery?

With each one, I’ve seen a piece of work that I’ve really liked, then researched them and made contact to see if they’d be interested in working together. I have to personally love and believe in their work. Luckily, all the artists I’ve worked with from the beginning have become really popular, and we’ve grown together with them organically. For example, the value of Dave White’s pieces have doubled since he and I started working together. Our current exhibition showcases both up-and-coming and well-established names, including Piers Bourke, Frédérique Morrel, Nick Jeffrey, Dave White, Corinne Dalle-Ore, and Damien Hirst.

What do you see yourself doing in five years' time?

I’d definitely like to have found the perfect permanent space in London, and like the idea of trying the pop-ups outside England, maybe in L.A. or Switzerland, for example. I’d also like to be more involved in the cars again, because I miss them a lot. If I could successfully find a way to work with both together, in my own little way, that’d be amazing.

Say you have five spaces in your hypothetical pop-up gallery of automotive art – what would you fill them with?

I’d like a mix that appeals to different people, just as we currently have with the art. I’m a Ferrari girl, so first of all I’d have a Ferrari 250 SWB and a Daytona Spider, as they’re my absolute favourites. Then I’d have a Jaguar XK120 and a Mercedes 190 SL to represent my girlie side. Finally, I’d love either a DB4 Zagato or an original Ford GT40 in there too, but I think my imagination is running away now. I think my accountant would be, too.